A pic a day

Mr. Beaver-on-my-Backpack has previously been featured on PW, about a year and a half ago. Now he has a new toy – the Canadian flag. I’ve wanted to attach one of these on my backpack for a while and finally got around to buying one when I was back in Canada. Patriotic or just “stylish”? 😉 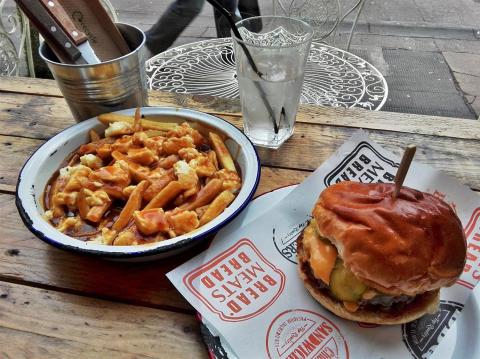 I found a place in Glasgow that serves poutine and my Canadian soul screamed, “GO TRY IT.” So I did. I had a regular poutine with a cheeseburger and if I gained 20 pounds today, this was probably why. In terms of weight, of course, not currency…though I had to pay a certain amount of (British) pounds in exchange for the pounds -_-” Anyway, I was surprised at the quality of the food. Focusing just on the poutine, it was actually a lot better than I had expected – just look at those gigantic chunks of cheese curds!! The only weakness was the gravy. If it were thicker, then it would be perfection, though if Glasgow does poutine better than Canada…then we’d have a problem. Side note: the portion of the poutine was so huge that I actually wasn’t able to finish it…and that says a lot because I RARELY leave food unfinished. Poutine 1, Annie 0.

You are currently browsing entries tagged with canadian at Picture Worthy.